Why do serious bodybuilders work so hard in each and every workout session? The answer is simple - they do it because they want to the get the maximum benefits from everything they do. From workouts to recovery periods to their dietary choices everything must be done in a way that inches them closer to their ultimate goal - the thing that will set them apart from mere mortals. Yes, we are talking about achieving the body of a god. And, to get there, there can be no shortcuts, no half-hearted attempts at getting the job done. And that includes the choices they make when it comes to which bodybuilding supplement they will use to help on their quest for perfection.

As these great athletes know, the right bodybuilding supplement provides the building blocks for superior performance and helps to overcome many of the problems bodybuilders have faced since the human form was created. These include need to sync heart, pulse and respiratory rates to keep the body running in the most effective manner which, in turn, allows them to achieve maximum performance.

With all of that in mind, we, as part of our ongoing efforts to help our readers find the best bodybuilding products available have decided to take a long hard look at one of the most talked about bodybuilding supplements on the market today - it's called Adrenal Reset. 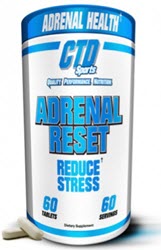 Developed by CTD incorporated at its US facility, Adrenal Reset and is designed to prevent the over-production of adrenaline in the adrenal glands by the circulatory and respiratory functions of the body in a smooth and steady alignment. This process prevents muscle group fatigue by optimizing the release of hormones which control multiple bodily functions.

A secondary goal of Adrenal Reset is to control the production of cortisol which also leads to muscle fatigue which, in turn, prevents the maximum possible gains in lean.

Designed around the critical key element known as Pantothenic Acid, the formulation developed by CTD is claimed to regulate multiple chemical process by preventing numerous adrenal hormones as they normally elevate sharply during periods of stress. These stresses include both physical and mental as their bodies and brains react to the conditions of increased activity demonstrated in physical exertion which their brains interpret as responses to signs of danger which causes a fight or flight response. Another key component in the formula is Bovine Adrenal Glandular, which is a secondary inhibitor for the over production of adrenaline. Another impressive claim by CTD is that these active ingredients can be expected to produce notable results in as little as one day.

As any experienced consumer understands, user reviews appearing on the official website for a product or on purchasing pages for affiliated resellers of these products tend to be overwhelmingly positive in nature. It's for this reason that we endeavor to find more unbiased sources for user reviews. In this case we set out to search a number of industry related websites that have no apparent connection to CTD or Adrenal Reset and various chat rooms dedicated to the subject.

What we found was that the vast majority of the user reviews that we came across had an overall negative view of their experience with Adrenal Reset. The most common theme in these negative reviews was that the users did not experience any significant effect over other supplements they may have previously used. Users who said that Adrenal Reset was the first supplement they had tried tended to say that they saw some improvement in the short term but that any positive effects quickly faded.

Given that there are reported issues related to heart rate problems it should be stressed that it is always advisable to consult with a primary care physician or other qualified medical professional before beginning use of this or any other similar product which claims to have such a profound effect on critical bodily functions and processes.

If should be noted that, despite all the claims made by Adrenal Reset, there is little to no hard evidence, either in clinical research, studies or trials that prove that the specific formulation for this product is effective. However, there are studies which show that some of the ingredients in Adrenal Reset have shown a certain degree of effectiveness in more generic studies.

Adrenal Reset is moderately priced at $39.99 per bottle. The recommended dosage for this product is one tablet twice a day with meals.

As discussed at the beginning of the review, there is only one reason serious bodybuilders work so hard to achieve the ultimate body they desire and that is to maximize the benefits of each and everything they do. From each repetition to each recovery period to each dietary choice to the bodybuilding supplement they choose each element of their training process must be the best it can possibly be. And, when it comes to choosing that bodybuilding supplement, the choice can be harder than it seems due to the fact that this multi-billion dollar industry is loaded with so many products that just do not measure up to the best in the industry and sorted them out is often no easy task.

Looking specifically at Adrenal Reset there are a number of issues that must be taken into consideration. The first is that there is no supporting clinical research, studies or trials that show that the specific formulation is effective. Secondly, there are credible reports that there have been health concerns related to heart rate issues among users. The third and final point is that independent user reviews that we could find had a decidedly negative view of their experience with Adrenal Reset mainly just in the sense that they did not find it highly effective especially when compared to other products of a similar nature that they had tried.

Putting all of these considerations together is seems that it is, indeed, very hard to justify placing Adrenal Reset among the best possible choices for a performance enhancing bodybuilding supplement.